Victor Yule was born on 11 June 1897, the youngest son and fourth child of George and Bathea Yule of Dundee. The sea probably ran in his blood as he was the son and grandson of two Dundee Sea Captains. The family story has it that when asked what service he was going to join he replied that it was certainly not going to be the Army like his eldest brother George – who was in the Black Watch on the Western Front – as that was ‘far too dangerous’.
Just before his 19th Birthday, on 6 May 1916, when he was then a clerk, he was officially called up and joined the RNVR at the Clyde division as an Ordinary Seaman. He then underwent training at two onshore establishments, Victory VI and Vivid I.
On 1st December 1916 he was put on the Crew list of the HMS Laurentic, as a Signaller (Flags). At that time the Laurentic was on its way back to Liverpool from Halifax, for the first time since leaving on 16 February 1915 for service in the Far East.
Victor joined the ship on Christmas Day for his first voyage, a fruitless search in the North Atlantic for the German surface raider SMS Möewe, which had set out on 26 November. By the time the Laurentic left on 28 December the raider had already left for the hunting grounds of the South Atlantic.
Three British agencies were involved with gold shipments to the US (JP Morgan Bank of New York) via Canada for payments for war supplies – the Treasury, the Bank of England, and the Admiralty – and their relationships had become strained in recent months. On 12 January 1917 the Treasury pressed the Admiralty for increased shipments which they could not meet with warships. This was because of the increasing problems of submarines – about to go unlimited from 1 February, although this was not known for definite by the British until 17 January with the decoding of the Zimmerman telegram – and also the presence of the surface raider.
Probably shortly after 12 January the Laurentic was recalled to Liverpool from the North Atlantic to transport to Canada the last of fourteen shipments of French gold from the British- French ‘Calais’ agreement of 24 August 1916.
The Laurentic had only been in Liverpool for a short time when it left on its last voyage on the 23 January, with young Victor on board, still a teenager, one of ten Signallers to die on the 25th, possibly the full compliment as it was dark, and one of two buried at St Mura’s Churchyard in Fahan, County Donegal.
The Dundee People’s Journal would later report in dramatic detail on the death of 20 year old Signaller Victor Yule. As day broke, Yule’s lifeboat was found by a local trawler, and of the 35 men aboard, not all had survived the night. Still working at the oars when the trawler pulled alongside, as the boatswain of the rescue boat reached out his hand,Victor fell forward and died where he sat, his hands still on the oars. 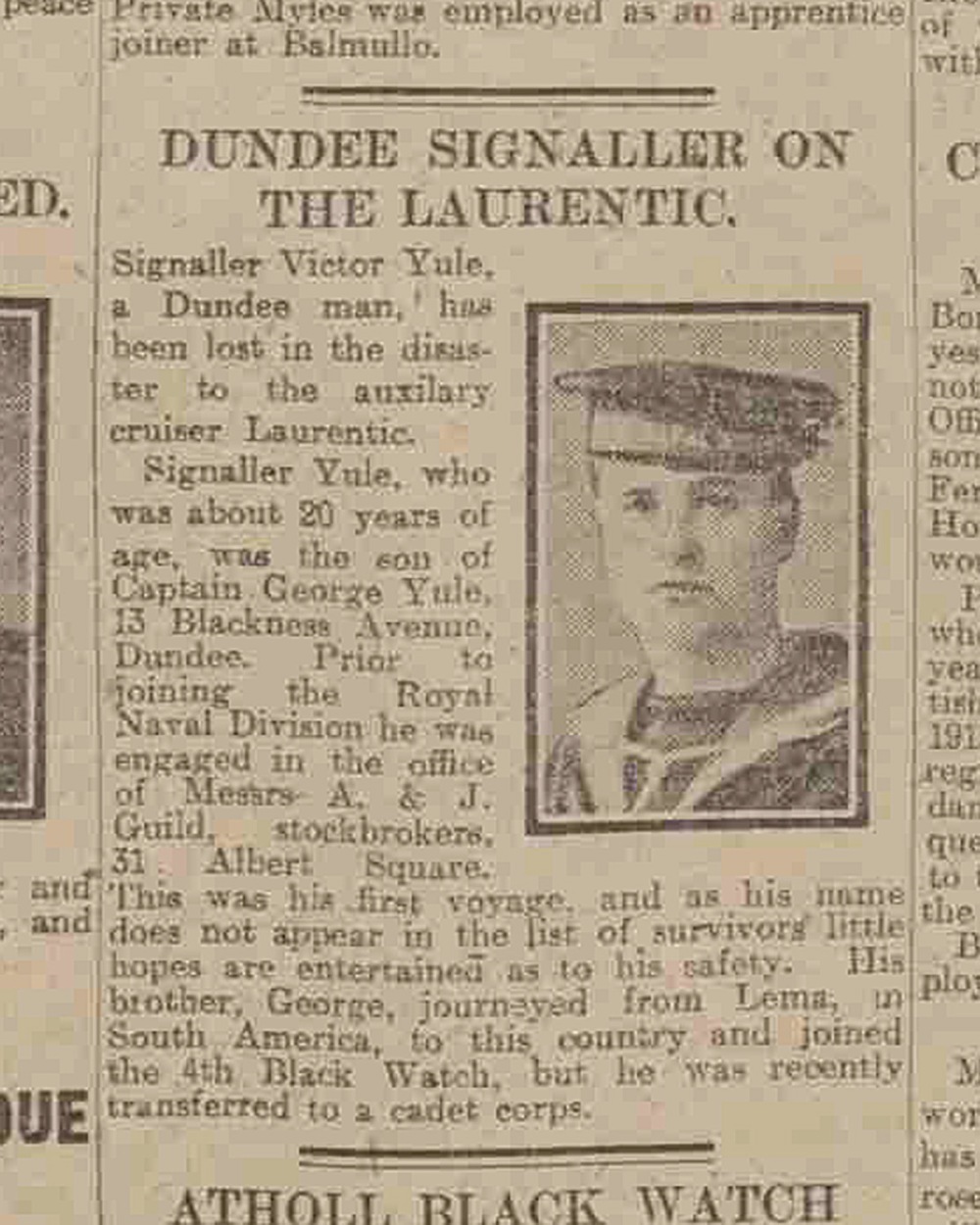