Sub-Lieutenant R.N.R. Lawrence Wellington Bell was born in Rangiora, Canterbury, New Zealand on June 19th 1894 to Charles William and Agnes Bell (née Paterson) of 108 High Street, Rangiora, Canterbury. His father was Mayor of Rangiora and earned his living as a tailor and outfitter.

Lawrence was apprenticed to the Union Steam Ship Company (USSCo), once the biggest shipping line in the southern hemisphere dominating the New Zealand coastal and trans-Tasman trades. From the late 1870s the Union Company had branched out from the coastal trade to establish passenger services to Calcutta, Vancouver, San Francisco and Australia as well as operating mail liners to Vancouver and San Francisco, Pacific Island steamers, and a small service to the United Kingdom. At the outbreak of WW1 Lawrence was Third Officer of the USSCo owned ship Waipori.

When war broke out in August 1914, the New Zealand government offered an expeditionary force to the British to serve as part of their army. Called the New Zealand Expeditionary Force, it served where and how the British authorities determined. Of New Zealand’s total population of 1 million, no fewer than 100,000 troops and nurses served overseas in WW1, excluding those in British and other Dominion forces. Of those, around 18,000 New Zealanders died in or because of the war, and about 41,000 men were listed as wounded. More than 2,700 died at Gallipoli and almost 12,500 on the Western Front. Most were young men, and nearly one in five who served abroad did not return.

Lawrence enlisted in the N.Z.E.F. in Canterbury in the early days of the war and was transported from Wellington, New Zealand to Suez, Egypt on February 14th 1915. He was a Private in the Ambulance Division, New Zealand Medical Corps, 3rd reinforcements, and spent five months as a stretcher-bearer at Gallipoli. He was invalided to England, and later dispatched to France as part of the new New Zealand Division.

He transferred to the Royal Naval Reserve on November 27th 1916 having gained his first mate’s certificate, and was then appointed by the Admiralty, with the rank Sub-Lieutenant, to the Laurentic. 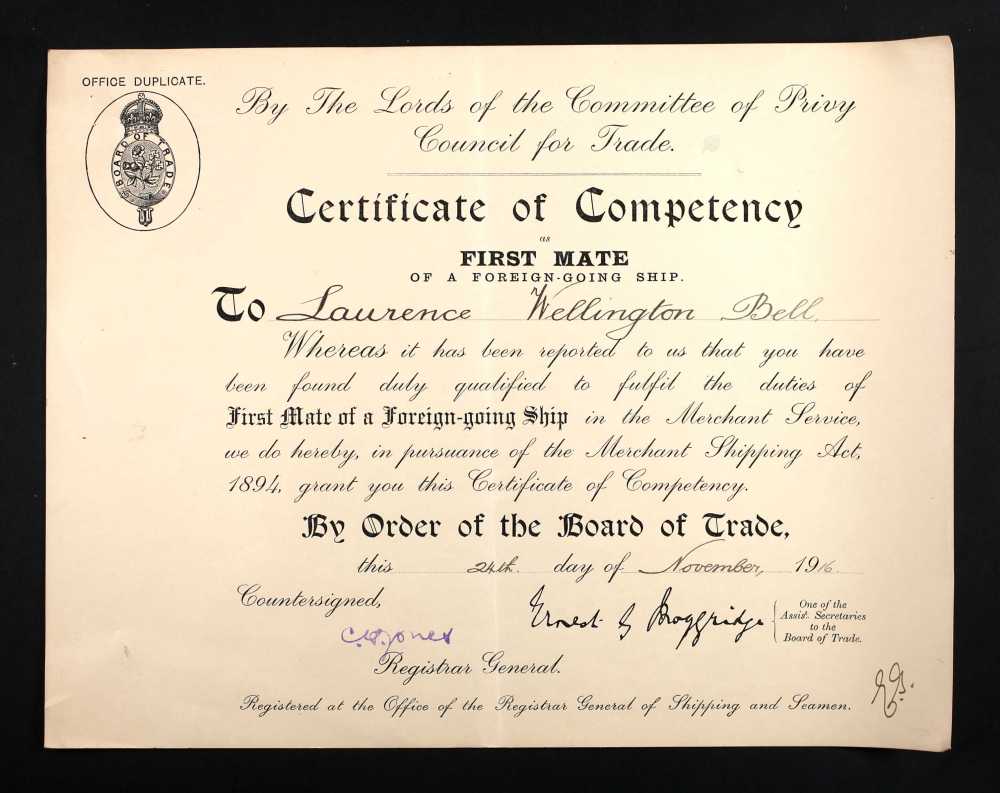 “There were at least three New Zealanders, of whom two lost their lives, on the Laurentic, when the vessel was sunk by a mine on January 25th. Engineer Sub-Lieutenant H. C. Hurley Nelson, was among the survivors, but Engineer-Lieutenant-Commander George R. Rutledge, R. N. R. and Sub-Lieutenant Lawrence W. Bell, R. N. R., were lost. Commander Rutledge was a son of Mr C. Rutledge, of St. Albans, Christchurch. He had been an engineer on the Ionic and the Cedric, and when war was declared was transferred to a warship as Engineer-Lieutenant. His further promotion came last October. Lieutenant Bell joined the New Zealand Expeditionary Force in the early days of the war, and served in the Field Ambulance as a private. On November 27th, 1916, he was granted his discharge in order to take a commission in the Royal Naval Reserve”.

“Sub-Lieut. Laurence W. Bell, son of Mr C. D. Bell, ex-Mayor of Rangiora, was drowned through the sinking of the auxiliary cruiser Laurentic. He was born in Wellington 22 years ago, educated at Rangiora, was apprenticed to the U. S. S. Co., enlisted in the 3rd Reinforcement, as a stretcher-bearer saw five months strenuous service on Gallipoli, was invalided to England, and later served in France. He passed for his first mate’s certificate, and was then appointed by the Admiralty, with the rank sub-lieutenant, to the Laurentic, which was an ex-White Star liner, converted for war purposes”.