Able Seaman Alexander Knight RNR was born in Broughty Ferry on the east coast of Scotland in 1898, the older of Alexander and Annie Knight’s two children. Alexander’s father had ten siblings and his mother had eleven, so despite the fact that he was one of only two children and has no direct descendants he does have a large number of living relatives, many in Broughty Ferry.

His father and both of his grandfathers were fishermen and had seen Broughty Ferry evolve from a small fishing village to a fashionable seaside town. This was due in part to the opening of the Dundee & Arbroath Railway in 1838, encouraging wealthy merchants to move from the grime of an increasingly industrialised Dundee to Broughty Ferry for its clean healthy air. In addition the town became a popular seaside resort. 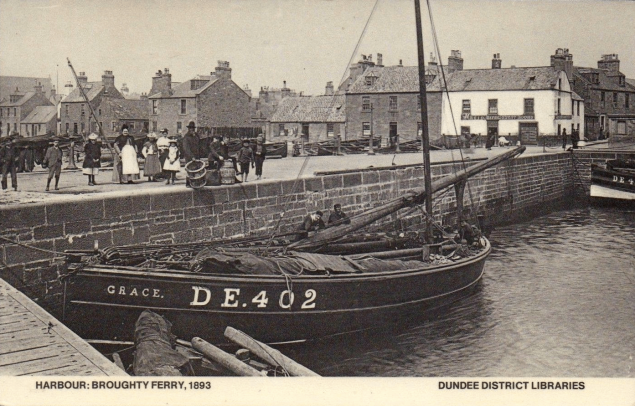 At the peak of the local fishing industry in the 1880s there were 180 fishermen and over 80 boats. But there was a marked difference between the fishing settlement located on the banks of the Tay and the wealthy merchants villas which had sprung up nearby. The fishing community was closely packed in the area along the shore between Gray Street and Church Street, which is where Alexander’s family had lived for generations. The community was close-knit and maintained a distinctive way of life. Annie became a widow when she was in her early forties, when Alexander senior died of consumption on in June 1910, so she would have been relieved to have the support of a close extended family.

Broughty Ferry ceased to be a commercial fishing port around the time of the First World War. There were a number of causes amongst them Broughty Ferry’s failure to embrace the new technology of steam which brought with it steam drifters which were much more efficient and less weather dependent. Local fishermen had to find new employment and, with few exceptions, took jobs with Dundee’s developing steam trawling fleet.

Alexander was 17 years of age when he joined the Royal Naval Reserve at the beginning of the First World War. In 1914, on the outbreak of War, despite its members having volunteered and trained for service at sea, the RNVR was mobilised and marched off to the trenches as the Royal Naval Division.

Alexander was amongst the 150 men who joined Hood Battalion of the Second Brigade and were sent to Belgium for the defence of Antwerp and narrowly avoided internment with the other battalions during the chaotic retreat of the following few days. The Naval Reserves played a great and decisive part in both World Wars, and a War Memorial onboard the HMS Unicorn commemorates those of HMS Unicorn’s Company who went to war and did not return. HMS Unicorn served as the Drill Ship for the Royal Naval Reserve and The Royal Naval Volunteer reserve in Dundee.

On his return from Antwerp Alexander was posted to HMS Laurentic. He was a member of the crew in December 1914 when the Laurentic left Liverpool for Sierra Leone and went on to patrol around the Far East from August 1915 till June 1916, at which time the Laurentic left Asia for Halifax, Nova Scotia. The ship returned to Liverpool, arriving in early December 1916. The crew were given a short period of shore leave, returning to the ship on the 22nd of December.

Alexander’s body was never recovered from the sea after the sinking of the Laurentic. He is remembered on the WW1 memorials in St. Stephen’s & West Church, Broughty Ferry and HMS Unicorn and on Portsmouth Naval Memorial. Tragically Annie also lost her daughter Elizabeth, to consumption, just a few months later, in September 1917.