Boatswain John Smith was born on the 3rd of November 1890 in Vadsgarth, Cunningsburgh, Shetland, the son of Andrew and Annie Smith (née Jarmson). He was the fifth of their ten children. His father was a fisherman and crofter.

John was working as a fisherman when he enrolled in the Royal Naval Reserve on the 17th of October 1911. The R.N.R provided a pool of experienced seamen for use during times of war. Men signed up to the R.N.R as a way of making additional money as they were paid a yearly fee for attending a couple of weeks training a year.

John married Ann Sutherland Mackay Manson on the 1st of May 1913 in Cunningsburgh. Their daughter Joan Goudie Malcolmson Manson Smith was born in October 1913.

Shetland islanders played a crucial role during the First World War. Shetland was the base for the 10th Cruiser Squadron which, throughout the conflict, enforced a blockade in the north Atlantic that sought to deny Germany vital supplies.

Up to 3,500 men from Shetland, prized for their seamanship, joined either the navy or the Royal Naval Reserve. Many also continued to serve in the Merchant Navy. Shetland seamen, whose ships were in German harbours when war was declared, were some of the first prisoners of war. Others were aboard ships that became trapped in Russian Baltic ports; some of them managed to escape via neutral Sweden.

Around 700 Shetland men never returned from the war, a loss that was felt for many decades. Many more suffered injuries or shell-shock. In terms of the proportion of the population, the loss of life to the war effort was substantially greater than the average community’s.

John Smith’s body was never recovered. He is remembered on the Shetland war memorial , Shetland’s Roll of Honour and Portsmouth Naval Memorial. 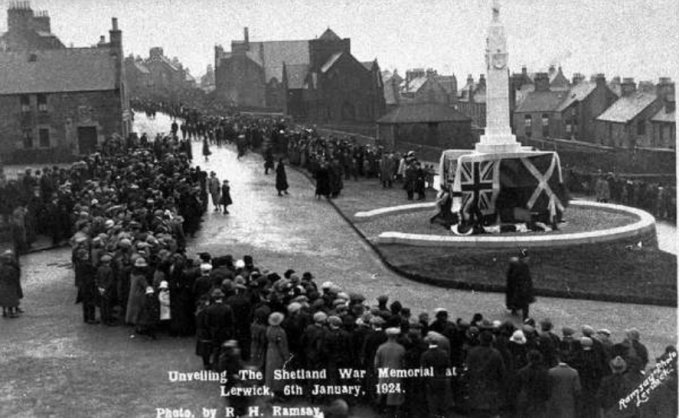